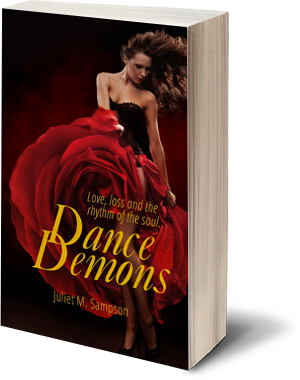 When Stephanie’s boyfriend is tragically killed in a car accident on the night of her 17th birthday, her once colourful life is thrown into utter chaos… but is there more to the story than she has been led to believe?

Stephanie fails to find answers, even after a visit to the eccentric psychic Madam Farrell. Broken and disconnected, and in search of a distraction, Stephanie soon finds comfort in dance. However, this form of comfort quickly morphs into a dangerous addiction. Spicy Latin beats pulsate through her veins as she delves deeper into the handsome and alluring teacher Anton’s dark world of dance.

Will the dance Stephanie loves lead her down a path of destruction or will it give her answers she is searching for?

Dance Demons, third novel by Juliet M Sampson is a story about finding your passion whatever it may be and not letting anyone stop you from achieving your goals.

The main character in Dance Demons, Stephanie finds a love of dance which eventually helps her to overcome the grief she is going through after the tragic loss of her boyfriend.

This story is a bit of a thriller, so sit tight and concentrate.

Through Dance, Stephanie does encounter other demons, social demons she was not prepared for at all.

Stephanie is side-stepped to struggle with this and her future, seeking the advice of an eccentric psychic, Madam Farrel through a crystal ball and tarot cards.

Chimes blow in the breeze, a Buddha and an angel appear at the top of the stairs, scent of musk incense envelop the room as Madam Farrel, draped in a cape with a purple, dark hood with candlelight lighting her pale face looks into Stephanie's future to guide her into the unknown.

Stephanie continues her Love of Dance with Salsa, Tango and Cha Cha moving and dancing to the beat of the music.

Dressing up in silvery dance heels and suitably sexy black dress with a hint of red lippy, Stephanie continues each dancing step and movement to the passion and fire of Latin American Dancing!

Set in well-known areas of Melbourne with the influence of South American Dancing this is a novel to entice you.

So, put on your dancing shoes, dance to the beat and don't let anyone sway you!

The problems Juliet poses in this book might help other young readers overcome the social dilemmas and uncertainties of today but still sees the beauty in dance as an escape.

There are many twists and turns in Dance Demons that make this an exciting thriller as well.

This, Juliet's third novel, represents another very big step in her development as a writer of stories for young adults. It engages with some very complex and difficult issues, such as criminality, drug usage, death, murder and sexuality. Juliet's writing style has matured significantly and she tackles these topics with a directness and simplicity that would, I think, appeal to young people who themselves are forced to face and think about such matters.

The world for all young people is a fast moving and scary place as much as it is an unfolding sequence of new and wondrous experiences. The heroine, Stephanie, is forced to face up to that knowledge that not every one who smiles at you and looks handsome has your best interests at heart. She discovers that following her passion (learning to dance) without keeping watch over your fellow travellers can have serious consequences. After having to face up to a personal tragedy, Steffie decides to re-engage with the world through her love of dancing. For a straightforward romance that should lead to a happy ending. However, Steffie's naivety puts her into the hands of a sinister set of circumstances which no young person should relish.

The author's simple direct writing style enhances the drama of the story and provides an interesting read. I commend it to all readers, but especially to those for whom it is intended.

I really like this book and love the main storyline. I felt I could connect with the character ‘Stephanie’, as she grieves for the loss of her boyfriend and learns to move on, while also trying to find answers. Going through grief is hard but doing that at a vulnerable age (late teens) is harder. Especially when the fate of studying for your HSC looms over you. So Stephanie decided to go to dancing classes to help her cope with her grief which is a great way to turn a negative into a positive. However, her vulnerability clouds her judgement and like other girls she becomes a target for danger.
I love how the author included a psychic into the story to try and help Stephanie find answers, although I would have liked more detail about Stephanie’s readings and more description of Madam Farrell’s shop. I also found it fascinating about the book ‘The undiscovered worlds of Peru’, which Stephanie borrows from the library after the recommendation from another reader. I thought this was another topic which could have been expanded on more but maybe the author thought it would shift the focus away from dancing, to do so.
In my reviews of Juliet’s 1st and 2nd book ‘Behind the Mask’ and ‘Bon Voyage’, I had mentioned about my concerns of the dialogue and jumping from one scene to the next. I felt there had been improvements with the dialogue shown in Dance Demons and this book had a better flow to it. In some sections it still jumped a bit but overall a big improvement! I really enjoyed this novel and would definitely read it again :)