What do authors and sunflowers have in common?

Some things run in the blood. I’m a farmer’s daughter, however I didn’t really appreciate the greenness that was in my genetic makeup until I lived in England, and put my fingers into the cold winter ground. A soil that was cold to touch, and where everything turned a shade of brown in winter. Or it just died…But when that earth warmed up, spring flowers that were so beautiful captured my heart, and stayed there into the long hours of extended summer sunshine, before once again dying off. I began to garden more, and I began to truly love gardening.

When I moved to Australia I found myself back in a place which is more like Zimbabwe and South Africa, where drought is a constant enemy looming on the horizon. We bought a block of land, and my gardening needs changed. I could now grow almost anything I wanted to, space and budget permitting… I was no longer happy to buy a tray of seedlings for $2.80 for 6 plants, when I could grow much more than 6 from a packet of seeds that cost me 99c. I began propagating from slips ‘stolen’ along the way, or shared from other gardeners, and slowly, my garden took shape, and the love of gardening seated itself deep in my heart and stayed there.

My garden is now a more tropical one as I live on a sand island, and summer storms often batter the coast. However, that doesn’t stop me trying to grow all sorts of plants, and seeing what works and what doesn’t. I was told roses hate the salt, however we have a hedge of red carpet roses along our canal frontage that thrive on neglect. (So do the weeds, but that is a different story…) The less hardy roses do better in containers, and no rose likes my briny sulphur smelling bore water. But that I can live with, I am a gardener after all and will do what I can to keep those ones alive. So in my tropical garden I still grow flowers, its not all palm trees and gingers (although the gingers have some really pretty flowers I might add). Some of my favourite flowers would have to be sweet peas, roses, orchids, all types of lilies, daffodils, irises and pansies, and at the top of the list, sunflowers.

I grew up reading Wilbur Smith, Bryce Courtenay and Beverley Harper. They all wrote epic stories of Africa, and I aspire to carry on their tradition of telling stories of my birth continent. Unfortunately Beverley died before I got to Australia, (so I will never meet her) and Wilbur I have never met (but still desperately want to) and then there was Bryce. No, I never got to meet him either before he was taken from the world too early, but someone I know did. And what’s better is that Bryce was also a gardener. (So I am taking this as a really fabulous omen, both for my garden and my books!)

Juliet decided to carry on a legacy from Bryce – and for this I’m in her debt. She sent me this little bag, and inside were 10 seeds. To me they were as precious as gold because of what they represented. Their father had been Bryce. So I planted my seeds, and continued spreading sunshine that is sunflowers, and the inspiration to write. At first I had this tub outside my study window, and while this is an ideal spot, soon the single seed that grew was too tall, and would touch the washing. So I moved the whole pot to outside my bedroom, and here I watched as this beautiful plant gave me not one big flower, but multiple little flowers up the stem, and one larger flower at the top. I grew a Bryce Courtenay sunflower!

How cool is that!

I didn’t cut the flowers because I wanted to gather the seeds and continue growing them year after year. I did get a few seeds, and have replanted them this year, but that was only a few days ago, so there isn’t movement – but I’m sure that soon there will be more of Bryce’s sunflowers smiling at me as I water them, inspiring me to greater heights. 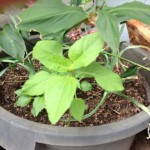 Along the journey of these original seeds, I gained a friend in Juliet, and that is to me more important than the sunflowers themselves, the kinship of a fellow writer. Perhaps this is what Bryce meant when he gave her that first sunflower, and told her to share it with other writers. That the giving of something so small as a seed, can inspire creativity in others, and let them bloom too! And that in summer all across Australia now, his blooms are shared between the authors, and they help bring life, beauty, stories and books into this world. 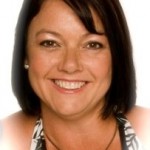