Many people have wishes, especially around this time of year. I must say that this year, a few of mine have come true.

I’ve always loved dogs and had a pet Shetland Sheepdog for over seventeen years. It has been several years since his passing and I miss him very much. Secretly since then, I wished for another dog but knew in my heart I was not ready. January this year I toured Tasmania and had a fabulous travel guide who had a Westie dog named Tavish. She inspired me to get this breed of dog and now my name is on a waiting list to get a puppy.

Having a love for dogs and books, I’ve been lucky to discover Little Dog and the Christmas Wish. Corinne’s picture book has been chosen for the Melbourne Myer Christmas windows this year. The window display is magical allowing Corinne’s words to come to life and Robin Cowcher’s illustrations to become 3D.

When I was a little girl my parents would take me to see the windows. I would gaze into the windows with awe and listen to the narrator telling the story. I wished that one day I might write stories but would never have guessed that I would know the author who wrote this story.

Flash forward, I’m proud to say I know Corinne, author of Little Dog and the Christmas Wish and she has kindly answered some questions about this special journey.

Welcome Corinne, and congratulations on this fabulous achievement, I’m looking forward to asking you some questions.

What do you love about your job?

The writing. To me it’s always about the writing. No perfect words, no story, no book.

What gave you the idea for Little Dog and the Christmas Wish? And how long did it take to write?

The idea came to me when I read a newspaper article in 2008 on how many dogs get lost around Christmas. Black Dog Books had asked me to write a Christmas story and I presented the Little Dog storyline to them (along with 5 others). There were some hold-ups along the way, including changes in illustrator (twice) and also when Black Dog Books became an imprint of Walker Books Australia.

I read you started writing the story at the Hopetoun Tea Rooms, does this place have a special significance for you?

I was having lunch with a friend in the Hopetoun Tea Rooms (just a favourite place to meet) and while I was waiting for her, the story idea came to me. Almost the whole thing, so I started writing. Much of the story is how I began it that day – 7th November 2008.

Was a Westie always the breed you had in mind for the book? And if yes, why?

Initially I thought of only a small scruffy dog, something like a Greyfriar’s Bobby. Then I started researching dog breeds and a Westie’s strength of character and nature, determination and resourcefulness, plus the fact that Westie’s are white, made the decision easy.

When you were told about your book being the story for the Myer Christmas windows, how hard was it to keep a secret?

The biggest secret I’ve ever had to keep!

How does a book get chosen to be the story for the Myer Christmas Windows?

Apparently many people who knew John Kerr, showed him the book. When he read it he knew immediately it was the book for 2015. He then presented it to Myer and they also immediately agreed it was the perfect book for the 60th year anniversary of the windows.

What was the most special moment for you when you saw the windows for the first time?

I arrived in the city early on the day of the windows reveal, and walked through Myer from the back and out through the front entrance on to Bourke Street. I nearly died when I saw the crowds and the cameras. I raced (if I was a dog it would have been with my tail between my legs) straight down Royal Arcade and into the Hopetoun Tea Rooms where Maryann Ballantyne (Black Dog Publisher), Robin Cowcher (Illustrator) and I, were having a celebratory lunch.

Do you have a favourite window and why?

Two favourites – Hopetoun Tea Rooms because that’s where it all began and Flinders Street Station – Maryann and I both cried when we first saw that still being made at Stage 1.

How many times have you visited the windows this year? And can you share with us some memorable comments about the windows?

Actually only 3 or 4 times and I still haven’t had a really good, slow, look. Comments, they are all so positive, which is the best feeling. The fact that Stage 1 have been so true to the story, is very important to me. It has been such a memorable experience for everyone involved.

What will happen to the windows after Christmas?

I can’t remember the order, but for the next three Christmas seasons they go to Bendigo, Geelong and Wagga (think that’s right). There are also four windows in Brisbane this year.

Thank you Corinne for taking part in the Q&A. I know you are such a busy lady. Congratulations on having your story chosen as the 60th Anniversary celebration of the Melbourne Myer Christmas Windows. All the best.

This fabulous adventure keeps continuing, Corinne and Robin had a launch of the book and I got invited along. One of the highlights at this event was people were encouraged to bring their Westies to the reading. The audience was lucky to meet a surprise guest, Prince Harry, the Westie. A wonderful day was had by all! 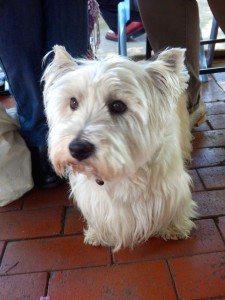 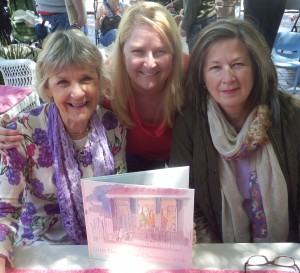