I brushed away the annoying fly that was hovering around my face as I strolled along the golden brown uneven path that headed into the distance. The pathway lead between skyscraping smooth rock and was my first adult experience of this barren land. Over thirty years ago I had visited this harsh environment where the dry heat sunk into my body but it called to me again. I continued walking as the flies considered landing on my arm. Another brush was given as they persisted to fly around my face.

The fight between us was ongoing as I observed the red dirt and long grass. Resting on a nearby rock I gazed into the clear blue sky where white fluffy clouds drifted and observed the rays of light that filtered through. My hair whipped across my face as the breeze blew. The sleeves of my top flapped in the wind. The continuous hum of the little flies stayed close and echoed in my ears. I waved my hand again giving another brush and hoping the wind may blow them away too. No such luck! Ignoring was the best option. Grounding myself back into the moment I looked over at the jagged rock formation. There were patches of green grass amongst the pebbly surface. I was alone and all I could hear now was the rustle of leaves. The flies had gone. I noticed my shadow on the ground as the sun shone across the open land. My eyes met with it and I squinted responding to the bright light but was then distracted by a group of people that now had entered the scene. Big, broad-brimmed, brown hats covered some of their faces as others had fly nets dangling around their chins. Cameras hung around their necks. Their laced boots with solid soles walked along the track. Small slow steps were taken along the uneven surface. Time to leave. 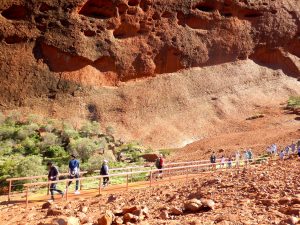 My soles crunched against the tiny rocks that rolled under my shoes. I listened to the faint sound of chirping birds as I headed towards the bus ready for my next adventure in the Australian Outback.